The Legend of Evil Flav

There was once a strange little boy from a distant town called Erie.  Oh, it was a simple town with normal families, normal festivities, and a normal lumber mill that everyone worked at.  But this boy was strange, he was different.  He was quite a bit taller than the other kids, his shoulders were a little bit lopsided, and he never smiled.  The kids teased him, adults looked the other way.  It was a gloomy life for him in the town of Erie. Thus, he never smiled.

This was nearly 100 years ago, and hardly anyone has heard of him since.  Legend has it, that anyone that met him has died in their sleep.  How do I know this you say? I met an old defeated man named One-eyed Willy who shared a dream with his twin brother Banilli.  Banilli passed away in his sleep. 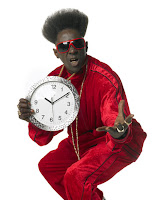 According to Patches (Willy), the typical dream starts off with you lying in your own bed.  You may have not even noticed you fell asleep already.  You start to hear a tick--tock--tick-- tock getting closer and closer.  You tense up.  You don't own a ticktock clock anymore, it's all digital now.  You squeeze your eyelids shut.   But then you feel two loving arms around you, and you open your eyes.  The most gorgeous woman you have ever laid eyes upon is next to you in bed.  You're instantly in love, embraced by the caring arms of your dream girl.

Suddenly, you feel what seems to be two extra limbs around you.  You get totally creeped out for a moment, but then you figure she's reaaaally flexible.  Images of your Kama Sutra book illustrations flash in your mind and Love mutates into fullblown Lust.  Sex-crazed, you start limbering up...but then....

You feel YET ANOTHER SET OF LIMBS.  Before you can figure this one out, his beard brushes against your cheek....

And those are the last memories.. you will.. ever... have. 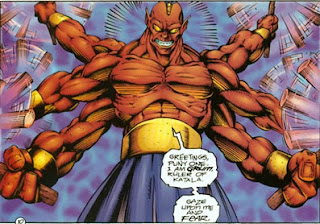 Poor Evil Flav, only wants the comfort of another human being, but keeps scaring them to death.
Posted by Chun Lick at 2:09 PM

Email ThisBlogThis!Share to TwitterShare to FacebookShare to Pinterest
Labels: Legends